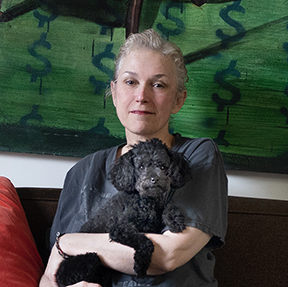 Sally Davies is a photographer whose works are in the permanent collection at the Museum of the City of New York and the NYC 9/11 Memorial Museum.  She is the author of the book "New Yorkers" and of the acclaimed McDonalds Happy Meal project (1.75 million online hits).  Her archive is now part of the Downtown Collection of Fales Library at NYU. Her photographs have been featured in the New York Times, the UK Daily Mail, PDN online, Huffington Post, Photolife Magazine, The Guardian and The New York Post.  In 2014, Sally's ”Lower East Side Photographs" were exhibited at the Bernarducci Meisel Gallery in New York City, with a 2nd solo exhibit "New York at Night” that followed on June 4, 2015.  In 2014 Sally received a citation from the city of New York for her ongoing commitment to photographing the Lower East Side.

She took Allen Ginsberg’s old apartment when she moved from Canada to New York in 1983, and she still lives in the East Village with her dog Bun.

Her photographs  have been featured in: